This cannabinoid profile, instead of profiling a specific cannabinoid, will describe the CB1 and CB2 receptors, which are the main receptor sites for the body’s endocannabinoid system and interact with all currently identified cannabinoids in some way. A scientific understanding of these receptor points and how the 70+ cannabinoids interact with them and with each other is crucial to the future of using cannabis as a medicine. 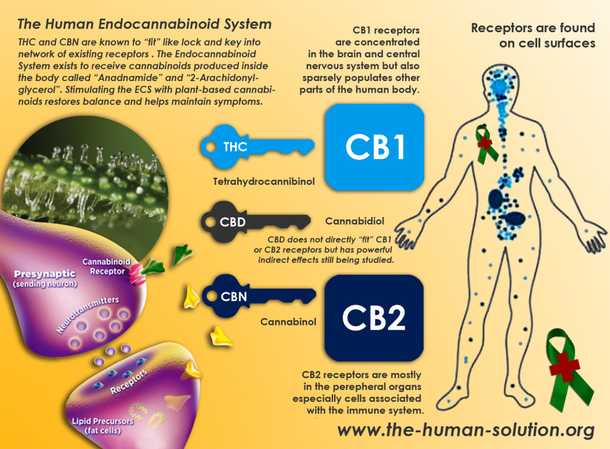 Here is the general layout for CB1 and CB2 receptors in the body.

Many of the effects of these various endo- and phyto-cannabinoids are on our brain. There are numerous locations throughout the brain where CB1 receptors have been found as well as activity at the TrpV1 receptor and 5HT1a receptors. 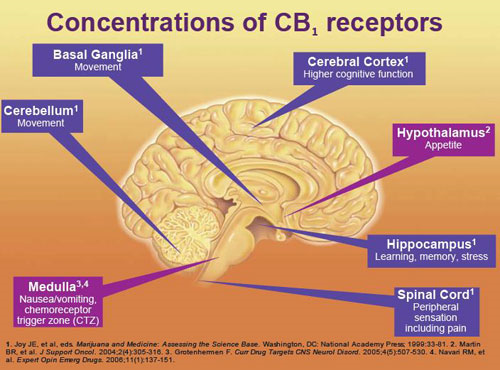 This is your brain on medicine.

Dispersed throughout the human brain, CB1 receptors control everything from basics like movement and pain perception all the way up to our higher cognitive functions and learning, which may explain why cannabinoids have been found in breast milk in multiple studies.

The sheer pervasiveness and versatility of endocannabinoid receptors have led some eminent scientists to speculate whether a healthy endocannabinoid system may be required for healthy human functioning. That isn’t to say everyone must use cannabis to be healthy, but it does mean that deficient endocannabinoid systems need to be supplemented somehow. Fortunately for us, nature has, as usual, provided a cure.